That's something little Foxy asked his new baby brother last night, with a smile on his face. I think it was a rhetorical question, though I wouldn't have minded hearing him explain it a little more.

Elliot Arthur Thompson and his mom are both doing good, and we're now back home. I'm gonna be spending most of my time this week helping out with the recovery and the baby. Both Oliver and Claire are thrilled (and wish they were home from school to help out as well). 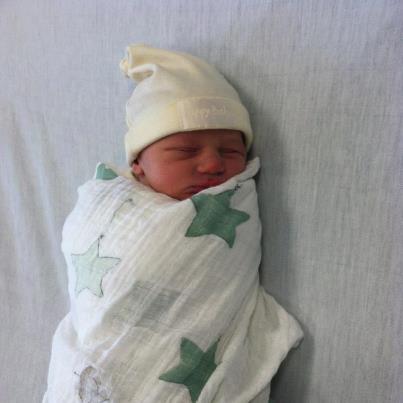 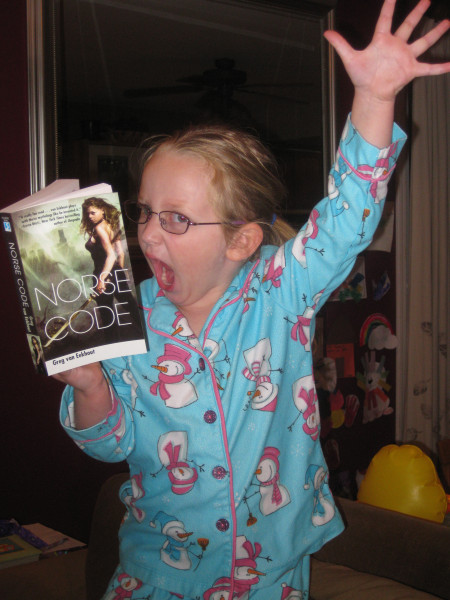 I know, I know, try and control yourselves. Yes, this is a blog from Dave - a rare and endangered species.

Things have been pretty wild here. Additionally, my work has blocked LJ, so...that pretty much sucks.

But here's a quick update:

(People who have rated it have given it good ratings...no reviews yet, though.)

There's possibly more audiobook news coming, which is the other reason things have been quiet here. I am excited!

So, other stuff. The chickens. My God they're HUGE. I really need to post some more pictures of them. Hopefully they lay some eggs soon so Greg van Eekhout can come up here and make us omelletes or scrambles or whatever it is he does with eggs.

The kids are wonderful. Claire had her first sleepover (a friend at our house) last weekend. They watched one of the American Girl movies (Claire's now read almost all those books). Oliver enjoyed having Claire's friend over too, and enjoyed it even more when we went swimming at the grandparents house, and then he got to stay by himself and spend the night at his grandparents house by himself. He's slept over there lots, but never without his big sister. Being the second kid is tough, I guess.

I am not writing as much as I like (SHOCKER, I know, with all the other stuff). But I have been doing quite a bit of thinking, and I have a pretty solid idea on where I want to go next. We'll see if I get there or not.

I'm lstening to GRRM's Storm of Swords. You know, sometimes you hear so much about a series of books, that it...well, I don't think it turns me off, but it made me feel like I can put them off (probably that it was part of a larger series that's still not complete is something). But a friend of mine at work hounded me, and I listened to the first two and loved them. And Storm of Swords is easily the best thus far. I just got to that part where the character I've hated for the last three books has...well, maybe not redeemed himself, but I don't hate him as much as I did previously. That's pretty hard to do, consdering what that character did in the first place to make me hate him so much. So, yeah. Pretty amazing writing, and I'm so happy I gave in and checked these books out. I hear there's a TV show, and I should probably watch that at some point.

Lots of stuff has been happening at la casa de Krylyr. We went to Maui, and I need to post more about that, because more than ever before, Maui totally stole my heart. But this is even better than Maui.

I've been sitting on this for a little while, mostly because it's so cool, I just can't wrap my brain around that it's REALLY HAPPENING. Even after I agreed to a contract. Even after I turned in the first 15 (er, 27 minutes) of my recording and it was accepted.

DUDES. I get to read the audiobook for Tim Pratt's amazing fantasy novel Briarpatch!

I am so stoked beyond words about this, I don't even know what else to say! I keep expecting people to email me that they've changed their minds.

I love this book. I loved it immediately - as soon as I started reading it when it came out last year. And those of you who listen to PodCastle know I love being able to share and read stories with people. Seriously, if there is a word to describe how happy and excited I am about this, please leave it in the comments because I have NO CLUE.

I'm recording. The book is scheduled to be turned in to ACX by the end of July. (Not 100% sure when that means it'll come out).

Those of you further away from the publishing industry who want to know when I can take them on a ride in my private jet like Tony Stark and Rhodey in the first Iron Man, no, I am not quitting my dayjob, but I am doing what I can so that I'll be able to do more of this kind of thing. (I have been talking to people about other things. I am excited. They are excited.) And I hope this is the start of something awesome!

2. When I decide to listen to the next of George R.R. Martin's A Song of Ice and Fire books, I should really take a week off and do nothing else. Or something. I thought I might listen to A Storm of Swords immediately after a Clash of Kings, but that seems like a very dangerous (or at least, highly irresponsible) thing to do.

3. The thing that encourages me the most as a writer is when I read (or listen to) something that just absolutely knocks me on my ass and leaves me with a stupid grin, wondering how the author did that. Could I ever do that? Or have that effect on someone else? (This is not directly related to note #2.)

4. Be excellent to everyone.

5. I desperately need a vacation. In one week, I'm getting one.

You guys, I can barely contain myself! PodCastle hit its 200th episode today! And we're celebrating with Scott Lynch's awesome story "In the Stacks," which has swords, sorcery, and takes place in the coolest, most dangerous library ever!

Also, Anna and I asked a lot of cool people to help us do a full cast reading! Anyone who can place Rachel freaking Swirsky's voice without cheating and looking at the cast list gets a no-prize! But also: Norm Sherman, Wilson Fowlie, M. to the K. Hobson, Graeme Dunlop helped out Peter, Anna and myself hugely with this one. And we got Ann Leckie, Alasdair Stuart, our forum mods Talia and Ocicat, and Marshal Latham to put the icing on the cake as our geek chorus.

It's a looooong one, but it flies by, so go listen, and spread the word! (More Words, MORE WORDS!)

I mentioned the possibility of this before, but AICN is now saying things have been SIGNED and are being developed. Which we all know means nothing, really, especially with Depp's insane schedule. But with Depp as Kolchak and Edgar Wright writing/directing? I have already bought my movie tickets, kids! Whether I'm seeing it in this universe, or the Impossible Dreams one remains to be seen, but I will see it!

Hey look! I've been interviewed along with my bad-cop partner-in-crime Anna Schwind by

csecooneyfor Black Gate magazine! If you want to know exactly what kind of story we're looking for at PodCastle, now's your chance!

I do think it would be pretty cool if someone sent us a Pirate Goats of São Paolo (although I can't promise that's what Anna had in mind)!

However, I had the immense privilege of being asked to record Ferrett Steinmetz's story "Devour" for Escape Pod, and I have to say, I'm incredibly proud to have been a part of bringing this one to the audience. When you read a story, you go over it and over it and over it, and I was (once again) impressed by how much Ferrett packed into his story. This is a dark story, but it's the best kind of dark - brimming over with humanity and love.

Ferrett's a writer to keep your eyes on, if you aren't already.

It's also an Escape Pod original, so this is currently the only place you can listen to (or read) it.
Collapse